Cholesterol serves several important roles in metabolism: it is a key constituent of all cell membranes and provides the structural framework of vitamin D and adrenal and sex hormones, as well as for bile acids which help digest fat and increase absorption of fat soluble vitamins. Most cholesterol is made in the liver and is so crucial to metabolism that, if necessary, it can be synthesized from either fatty acids or glucose.
The Brain is the Most Cholesterol-Rich Organ in the Body 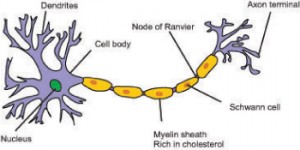 Cholesterol synthesized in the brain is the primary component of the myelin that surrounds each nerve cell as a protective sheath. Loss of myelin from disease or injury inevitably causes neurological damage. Both neurons and glial (support) cells in the central nervous system (CNS) contain unbound cholesterol as an integral part of their cell membranes.

Cholesterol & Cardiovascular Disease
High cholesterol may be associated with the onset of CVD, but cholesterol may be deposited as a “patch” on inflamed or injured blood vessels, particularly coronary arteries. Macrophages scavenge cholesterol along with other cell debris and may become “foam cells” which accumulate in artery walls and cause atherosclerotic streaks. Assessments of inflammation such as C-reactive protein (test available at GPL) or homocysteine level have been suggested as better predictors of CVD risk.

Homocysteine (Hcy) is a non-protein, non-structural amino acid that is generated by metabolism of methionine, an essential amino acid. Homocysteine can be recycled back to methionine with folic acid and vitamin B-12 as co-factors.

Low Cholesterol Associated with Mental Disorders & Mortality in Elderly
Understanding the health consequences of lower cholesterol has been aided by studying serious genetic disorders that prevent cholesterol synthesis in the body. Low choles-terol has been connected to greater risks of suicide, accidents, violence, and mood disorders, such as depression.

Cholesterol levels may influence serotonin activity in the brain. Serotonin is the neurotransmitter associated with mood, and low serotonin is associated with depression and violent and anti-social behavior. Several theories about how cholesterol levels are related to serotonin levels have been proposed. The simplest effect may be that if cholesterol in the nerve cell membrane is deficient, serotonin cannot properly bind to its receptor. Cholesterol also stabilizes receptors for the social-bonding hormone oxytocin.

In the elderly, studies over several decades have pointed to increased risk of death in the population with the lowest cholesterol. Falling cholesterol in the elderly is a sign of increasing morbidity, with controversy over whether it is a sign of underlying chronic disease or a cause of disease. It is very important to get tested for your cholesterol level.

Low Cholesterol Linked to Depression And Other Mental Illnesses